December 19, 2018
Tonight's dinner is a tried-and-true favorite among the menfolk, and one of the few that doesn't have meat. It's not vegetarian, however, since it does use cream of chicken soup. But it's so beloved of the men that I have regularly doubled the recipe and turned it from a side dish to the main course. 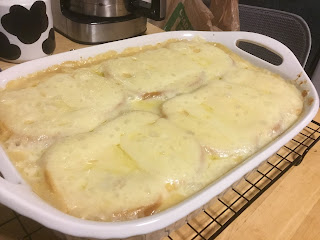 Slice onions. Melt butter in a large saute pan or skillet over medium heat and add the onions. Add more butter if necessary. Saute the onions until clear with a little browning. Meanwhile, in a separate saucepan, heat soup, milk and soy sauce, stirring to blend.

In a 21-quart casserole pan (9x9 works fine), layer the onions, then a layer of cheese and a dash of pepper to taste. Pour the soup mixture over the onions and cheese. Top with bread slices.

Bake at 350 degrees uncovered for 15 minutes until the bread is nicely toasted. Push the bread slices under the sauce and top with the remaining cheese. Bake another 15 minutes.

Notes: As I said, I always double this recipe, so it fills a 9x13 casserole. I also always seem to forget the layer of cheese on top of the onions and under the bread, so often that I'm thinking of rewriting my recipe to put it in ALL CAPS. Seriously, almost every time I've made this I end up having to pry up the bread, getting hot sauce all over my fingers, and sliding the cheese underneath them. This is not optimal.

It can be done with sliced Swiss cheese or shredded. I generally find sliced cheese is easier to manage, but your mileage may vary.

Pushing the bread under the sauce is harder than it sounds without making a mess, so I've sometimes just spooned the sauce over the bread. Also, I've found I get better results by cutting the bread slices in half before laying them out; that way the casserole breaks up into nice serving sizes without having big hunks of bread slopping around when you're serving it. I've never tried to make it by chopping the onion instead of slicing it, but that might also be a neat variation.

Easy as hell and very tasty. It does make a fine side dish, but is filling enough for a mostly-meatless main dish. It is absolutely not healthy.
recipes