Showing posts from March, 2015
Show all

Look out, toddler behind the wheel!

March 30, 2015
Or so that's what I always see. Someone needs to tell me that I'll get used to seeing my kid driving the car in which I am a passenger, because every time I look over at the driver's seat and see Boy, I see the little seven-year-old imp whose feet couldn't quite reach the petals, grinning at me as he played at driving. He's not bad at it, really. We've been woefully inadequate at taking him out to practice, in part because of our crazy schedules that never intersect, and in part because it's immensely stressful. Look, I know he isn't likely to kill us, not as carefully as he drives right now. But the consequences for even a minor fender-bender while he's at the learner's-permit stage are so disastrous that it makes me five times as nervous. Plus, it's MY new car. We were supposed to teach him on Jim's old piece of crap. Which didn't last long enough for Boy to get a learner's permit. At one point I declared it was just too m
1 comment
Read more

March 16, 2015
For the record, brain, it was not very polite of you to come up with the title and two-thirds of the plot to the next Nocturne  novel at church today. Especially since we're obligated to about three more projects before we could possibly get to that one. It's gonna be kickass, though. ---- Day two of Waiting for Dreamhost. Something like Waiting for Godot; when something goes wrong with my website, they respond instantly, and sometimes I can even get a live chat for help. When something goes wrong with the webstore, I must post in the forum and wait for a reply. It's been more than 24 hours and no response. If I call them, the price is $99. Waiting. Waiting... Let's make bets! ---- Boy: Are we doing anything Tuesday? Me: *parabola-mouth* Boy: What? Oh. Oh my God. Me: *supersniffle* Boy: It's your birthday Tuesday, isn't it. Me: *pout* Boy: I may have to do some shuffling. I forgot. Me: For the record, that's the last time you get a free pass
Post a Comment
Read more

March 13, 2015
BOY: *drops TV remote on the hardwood floor for the 900th time* ME: *glare of doom* BOY: I've got it! I've got it. It... still works. Sort of. Don't press too hard on the left side. ME: Would you go get a newspaper? BOY: Why? ME: So I can roll it up and smack you over the head with it. BOY: I didn't mean to! ME: Okay, we can't change input anymore. Quit breaking my shit! BOY: Watch your language. ME: Yeah, it's really goddamn unladylike to swear. BOY: You'll never catch a husband with a mouth like that. ME: *choke* Out-smartmouthed by my own spawn. The student becomes the master. ------ ME: Can you snag me a glass of milk? BOY: *dramatic sigh* ME: Oh please. It's not that big a trial. BOY: *more sighing* ME: Dear Mom, thank you for going to the grocery store after work and spending your hard-earned money buying food to fill my belly. I appreciate your sacrifices for my well-being. BOY: Thanks Mom... ------- ME: Metro-East Luther
Post a Comment
Read more

Terry Pratchett and a Vest Full of Stars 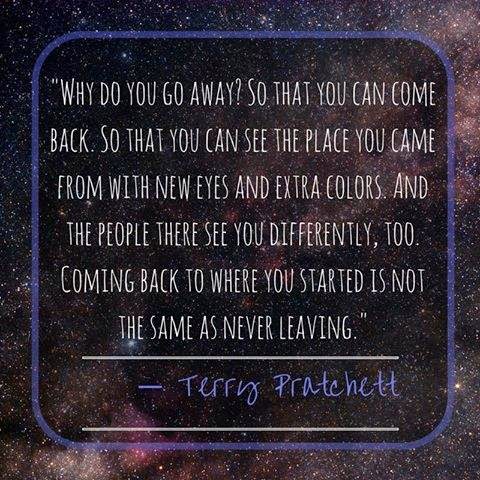 I've told this story before. But it bears repeating, given the death of Sir Terry Pratchett today. The author was mourned by more than his friends and family; he was mourned by the many readers who loved his work and had the honor of meeting him and being charmed by him, as I was, on one of the more nervous days of my life. In 2007, I attended a convention where the famous Terry Pratchett was the guest of honor. I was a nominee for an award and much consumed with my own panels, making sure there were people on the booth in the dealer's room, assisting my friend with her book release, and other such convention business. On Saturday, Pratchett had been scheduled for a signing one hour before me. Only one hour, which meant that by the time he was done, the line still stretched to Spain. There were a handful of us supposed to go on after Pratchett, which is a bit like scheduling a bar band to follow the Beatles. Fearing a riot, the powers that be kept Mr. Pratchett in place and
1 comment
Read more
More posts