Showing posts from June, 2015
Show all

The Life of a Reporter's Son

June 30, 2015
SCENE: The car, making an unscheduled turnaround in a Main Street parking lot. BOY: Mom, what are you doing? ME: I'm going back. BOY: I have to be at Scouts in fifteen minutes. ME: We're like six blocks away. You'll make Scouts. We pull up to the fire station, and I get out with my camera. Commence several pictures of the firefighter candidates doing "the ladder test," as they climb up to the top of the ladder truck at full extension - to see if they can physically do it, and if they'll freak out at the top. ME: Get my iPad. BOY: *eyes camera* Why do you need your iPad? ME: To take notes. BOY: You said it was just a photo! ME: I have to get information for the caption! BOY: *sigh* *teenage eyeroll* *retrieves iPad* ME: Thank you. I got the photo array. It was cool. He made Scouts. He's used to this.
Post a Comment
Read more

June 23, 2015
I have officially given up on the Boy's generation coming up with good teen dramedies. It really must suck to be a teenager now. To watch a movie with teenage protagonists, they basically have the choice of fantastical worlds like The Hunger Games  (good times, but whoa depressing) or they can go to "old" movies like Harry Potter  (just let that sink in for a minute). Or they can go to movies like The Fault in Our Stars  or The Perks of Being a Wallflower , nicely tragic. Boy is all excited about Paper Towns,  because it actually is about teenagers. My new mission is to find good teen movies for Boy. The movie-teens of the Eighties might have been a little light on parental supervision and plenty heavy on sex, drugs and rock-n-roll, but they were awesome in all the bright-neon gaudiness I remember so fondly. The top themes were breaking through socioeconomic barriers: poor vs. rich was a constant theme, as well as busting through the caste system of the modern America
3 comments
Read more

June 22, 2015
With Hypericon behind us, we enter a two-month lull in touring. I'm going to pretend that means I will be able to catch up the LitUnd inventory and bookkeeping, redesign LiteraryUnderworld.com and port to a new vendor, edit two books in the queue and finish rewriting Banshee's Run as I manage Julnawrimo next month . Pause for laughter. All those things have to be done before Labor Day, however, because I've been accepted at Dragoncon again and thus I will wend my way to Atlanta in September. That kicks off one of the most grueling schedules I've ever set for myself. First it's Dragoncon for the Labor Day weekend in Atlanta. I'm a solo act at that one. Then I go back home - for two days. Then it's off to Louisville, Ky. for Imaginarium, the second weekend in September. This will likely be a Literary Underworld event, with the usual cast of characters and the Traveling Bar (of Doom). Then back home, for three days. I fly to Florida that Thursday
Post a Comment
Read more

June 22, 2015
It does take more than money to make me happy. But the sales from this weekend in Nashville go a long way. I'm not going to disclose numbers. But I will say that the gross sales figures from this weekend are within shouting distance of our gross sales from Midsouthcon, one of our highest-selling conventions.  Why is this shocking? Midsouthcon has more than 2,000 attendees. Hypericon had maybe 200.  Those guys rock. My authors were happy. The staff was happy. And the Literary Underworld Traveling Bar was well-stocked.  (This show's most popular items were an awesome maple bourbon provided by Underlord Stephen Zimmer and the famous apple pie moonshine provided by Michael Farnette. Yum.) It takes more than sales. It takes good friends, colleagues in the small-press trenches and intelligent conversation that goes beyond debates about the Heisenberg Compensator to the reflections of popular culture in the world around us. It's always worth the lost sleep.
Post a Comment
Read more

June 17, 2015
I've been a loyal TiVo customer since The Leprechauns first sent me one. Waaaaaay back in 2005 or so, a TiVo with a year's service prepaid arrived on my doorstep shortly before my birthday. The card was signed only, "The Leprechauns." I was doing a lot more with CultureGeek back then, since it was part of my day job. When the column was canceled, I relaunched it independently. The upside was that I got to say "piece of shit" in my reviews. The downside was that I couldn't use work time for writing reviews anymore, which is why I go waaaaaay too long between posts. There are only so many hours in the day, and I spin too many plates as it is. I always assumed the Leprechauns were friends who were fond of the column and wanted to assist me in finding stuff to review. I never wanted to know, frankly; some things should stay secret. It was immensely helpful in that regard, and I became a loyal TiVo customer - even converted my long-resistant dad to the wo
2 comments
Read more 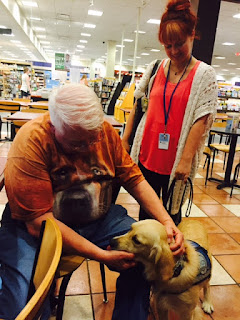 After a long day of medical nonsense, I got to relax with my writer pals at Eville Writers. And a puppy. Here, have a gratuitous puppy picture. Said puppy is a service dog being trained by awesome writer and Literary Underlord Cole Gibsen . I warned her that if she didn't bring me fresh stock to take to Nashville this weekend, I was going to send Jimmy to her house and mug her for books. If you have any fondness for YA fantasy and kickass writing, you should check out Cole. We seriously cannot keep her titles in stock. And we have the new one, which will be up on the LitUnd site before the weekend. She's amazing and her work is really on the upswing. Topics of conversation included the usual: state of the industry, self-pub vs. trad pub, recent signings, upcoming conventions, marketing your book and Julnawrimo. Yeah, I guess I'm going to do Julnawrimo again. I'm doing a rewrite on a previously-written project, because I am still not happy with it and since i
Post a Comment
Read more

The Saga of the Stolen Phone

June 16, 2015
I know some of you have known some of this, but now that it looks like it's not going to progress further, I guess I can tell the whole frustrating, annoying, infuriating story. We really aren't ones for big expensive phones. I use an iPhone because it is necessary for my job, and my old iPhone was about five years old. Man had acquired a smartphone two years ago; Boy was using an old-fashioned dumbphone. But as Man's contract came up for renewal, we decided to combine all of us into one family plan, and trade in our aging phones for a trio of shiny new iPhones on an installment plan. The menfolk were inordinately excited, especially Boy. He had never had a smartphone, and immediately began filling it up with goofy games and madly texting his friends. I was looking forward to helping him use it for organization, for time management and tracking his school assignments. At least, that was the working plan. Only a few days later, Boy had his theatrical debut in Les Miser
Post a Comment
Read more

June 11, 2015
A pleasant surprise today as Boy and I exited the local grocery store: a clerk reached out and handed me a small bouquet of flowers. "Free today, ma'am," she said, smiling. I am a sucker for cut flowers. I prefer the live ones, but they don't stay that way around me. I'm working on it. Man tends to mock me about this, because he likes to play fast and loose with his life. These were exceptionally bright daisies, in colors practically neon-strong that rarely occur in nature - at least in daisies. I knew they'd been dyed, which I usually try to avoid, but hey - free. The white and red roses adorning my living room had become desiccated corpses by now, and I lacked the cash to replace them with something more pseudo-alive. After putting the groceries away, I carried the dried-out roses to the sort-of compost pile in the yard, behind the trees. I cleaned the wedding vase and filled it with water and the little packet of preservative that came with the daisie
Post a Comment
Read more
More posts