Showing posts from June, 2010
Show all

June 28, 2010
Briefly: While I like the concept of Nanowrimo, I think we can all agree that November is a terrible month to write a novel. Thanksgiving, holiday shopping, family visits.. not to mention it's sweeps month on TV. Therefore I created Julnawrimo: Because There's Nothing Good on TV in July. The live-and-in-person kickoff is 6-10 p.m. July 1 at the Denny's in Glen Carbon, Ill. An online component is on its way for those who don't live in the St. Louis region. The full FAQ can be found on the LiveJournal community profile page, not to be confused with those guys at JulNOwrimo. You can also find us on Facebook and Twitter . Join up! Don't worry about making your 1,666 words or whatever per day. Just see if you can make SOME words each day for the month. Every word you write is another word you wouldn't have if you didn't try.
Post a Comment
Read more

Things I Forget to Blog About: Tuckerizing Edition

• Sara Harvey and I are rarely at the same conventions these days. Hypericon was the first one since THE COLD ONES came out. As you know, I named the kickass ex-Marine major in that book after her: Sara Harvey, zombie-hunter extraordinaire. Sara Harvey the author and Sara Harvey the character could not be more different. Author Sara is a generous, sweet, bohemian lady partial to soft flowing clothing of impeccable style, wide smiles and body glitter - often enough that my son dubbed her the Glitter Lady. Major Sara is hard edges all the way, unsmiling with short-cropped black hair, whose idea of fashion is a black tank top and camouflage pants. Author Sara has chopsticks and ribbons in her hair; Major Sara carries at least six guns and knives, and as hard as you try, you'll only find three of them. Author Sara writes beautiful, fascinating books of undefinable genre; Major Sara says "fuck" a lot. Enough for reviewers to mention it. As people bought copies of THE COLD
1 comment
Read more

Hey Rocky, Watch Me Pull a Rabbit Out of This Hat!

June 12, 2010
As Memorial Day rolled around, I had a problem. I'm captain of a Relay for Life team , raising money each year for the American Cancer Society. My friends know this is a very personal issue for me, as cancer seems to strike so often. I am lucky that it has not struck my immediate family. But just in this last year, I've seen several close friends undergo treatment for cancer. Just last week, a co-worker died of cancer, only five years older than I am. Our goal for the year was $3,000 - seemingly achievable, considering we raised a little over $2,700 last year. It seemed less achievable as about half my team dropped out due to scheduling conflicts. As May drew to a close, we had raised less than $1,000. This was a problem. Oh, I knew there would be some last-minute donations. Some people only donate at the very last minute. Some forget to send in checks. We sell glow necklaces and toys at the event; that usually brings in some cash. We had been in talks with Dairy Queen
Post a Comment
Read more

June 11, 2010
This is what authors do when they're bored. Stephen Zimmer posted about a book signing, and someone replied that he wished he could raise the money for his own book signing. For the purposes of this post, you should know what Shane Moore looks like. SHANE MOORE: Why do you need money? They should pay to bring you in. ME: Ditto. Book signings are one of the very few author promotions that cost you nothing. STEPHEN ZIMMER: Elizabeth and Shane replied before I saw this, and both of them are correct. Author signings at book stores should never cost the author. ME: If there is some bookstore that's charging authors for signings, we should step on that FAST. Author smash. SHANE MOORE: You let me know. I am IN! Grrrr! STEPHEN ZIMMER: That makes three of us… a new Musketeers? ME: The first person to photoshop that gets a right cross. SHANE MOORE: *slowly pushes laptop behind chair* Who would do such a thing? ME: Shane, I trust you about as far as I can armwrestle you. SHAN
1 comment
Read more

June 10, 2010
Tuesday, June 15 is my team's RELAY FOR LIFE DAY at the Edwardsville Dairy Queen! The local DQ has kindly agreed to donate 20 percent of their receipts on Tuesday to my Relay for Life team, and I am so grateful for their support. The only catch is: you have to have a coupon for us to get credit for your order! Whether it's a Blizzard or a full-out meal, you have to give them the coupon in order for your donation to get to us. The coupon can be downloaded from YouSendIt here , or it is available as a free download on The Literary Underworld . If anyone knows of an easier way for people to be able to download this coupon, PLEASE let me know. I will happily email it to anyone. Please feel free to forward it on to friends, relatives and anyone else in the area who might be inclined toward supporting the American Cancer Society and/or likes ice cream. I'm figuring that's just about everyone! And, as always, you can donate to the Relay team or directly to me , if you a
Post a Comment
Read more 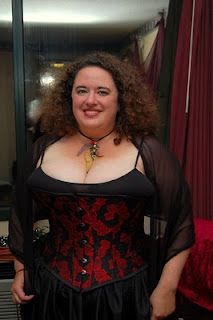 Last week I sojourned to Nashville for a little reading, a little signing, a lot of selling and plenty of catching up with old friends. I love Nashville, even with half of it metaphorically still bailing out from the flood. Remember, that OTHER natural disaster that's been pretty much ignored by the rest of the country? THURSDAY We first spent a couple of days staying with Stephen, a friend of mine from the dim dark years of college. There is a certain comfort in a friend who has known you since both of you were teenagers, a shorthand that allows you to talk without barriers because you speak the same language, you come from the same place. Stephen exclaimed over how much the boy has grown; I teased him about the horrifying cleanliness of his house; all was as it should be. On our "be a tourist" day, we drove out to Cumberland Caverns. Usually we go to the Opryland Hotel , which is my favorite hotel in the wide world and I have never stayed there because I lack the
2 comments
Read more

THE COLD ONES scores another big bite

June 07, 2010
Warning: I wouldn't wait much longer to get THE COLD ONES if you haven't yet, folks. Good things are happening for my Things That Go Chomp in the Night. I read from it, of course, and as usual they voted to hear it from the beginning. I never get to read the aswang sequence, dangit. At this point I'm considering Garage-Banding a reading and putting it on my web site just so I can get to read that sequence. Anyway. Rough numbers coming in from this past weekend's exploits (con report pending) and strangely, I sold nearly twice as many copies as I did a few months ago in Memphis. This is weird, because Hypericon is a mini-convention in Nashville, where I've never lived, and has at the most 300 attendees. In Memphis, where I lived for three years in college, Midsouthcon generally attracts between 1,500 and 2,000 people. And MSC really is a writers' con; between the high number of authors and publishers it attracts, Dan and Jackie Gamber's writers' wo
Post a Comment
Read more
More posts