Showing posts from February, 2016
Show all

Cross-post: CultureGeek on the Oscars and why Spotlight matters

February 20, 2016
It turns out I'm a dominant leadership style with a developer personality that becomes uncomfortable with limitations to my individuality and self-reliance. Also, I'm stubborn. But I figure Jim rigged the test from afar, so.... Lots of ideas shared and hypotheticals on dealing with certain situations that may arise. If I didn't already know that I tend to say "screw it" and take over a task rather than negotiate and coach teammates, I sure do now. I don't know that "belligerent" is a fair word, but I'll leave that to people who've worked with me to say and for me to keep disagreeing. I don't know that I've had all that many surprises about myself; I'm a bit older than a lot of the other attendees, so I've had more time to get used to myself and figure out what makes me tick. That's one advantage to getting older. If you're not comfortable with yourself by the time you're thirty-nine-plus-tax, you probably have
1 comment
Read more 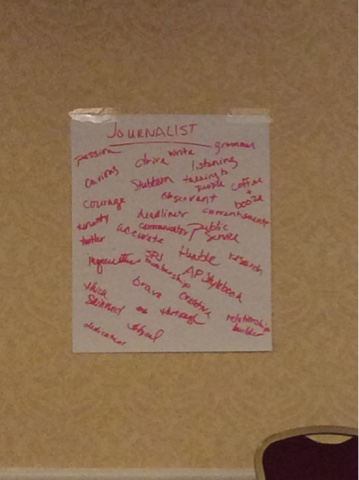 Let me preface this by saying that I had four hours of sleep last night, drove the entire six-hour drive from St. Louis myself, and then had six hours of the Scripps seminar before reaching this blog post. This will therefore be a short blog post. Tiiiiiiiired. In case anyone is wondering, the Scripps leadership seminar is intended to help journalists become better leaders, both in the profession and in the rest of their endeavors. It is an honor to have been selected, and so far I am enjoying getting to know my colleagues. I can tell that there will be some serious questions for us to discuss tomorrow. Much of today centered on evaluating myself as a leader. Of course, I don't really think of myself as a leader much of the time, because I haven't really sought out leadership. I seem to end up in leadership roles, however, usually because nobody else wants the job. If I sit down and think about it, that's really how I end up in charge of so many things. Relay for Li
Post a Comment
Read more

February 16, 2016
MAN: We're divorced. ME: I beg your pardon. MAN: I sent off the paperwork to [state agency] so you can have my pension.* Again. And they finally got it entered, but they still got it wrong. ME: You're kidding. MAN: Yup. They have us down as divorced. ME: Oh for fuck's sake. MAN: I called them and they're sending the paperwork so I can get it refiled as married. But for now, we're divorced, as far as they know. ME: So we're divorced. What're you going to do? MAN: Huh? ME: Hey, the state says we're divorced, you're a free man. What are you going to do? MAN: Get the paperwork so I can file it properly for us to be married. ME: Spoilsport. C'mon, free man! What do you do with your freedom? MAN: Mope and cry. ME: You would, too. MAN: Also, they need a copy of my birth certificate. It says I may have been born in 1967 but they don't know for sure. So I may or may not exist. ME: So you're divorced AND you don't exist and you&#
2 comments
Read more

February 05, 2016
Man: I wouldn't mind going camping this year. Me: We can't do it lightweight. Man: What? Me: Can't do it lightweight. Camping. It's in-tents. Man: ... Man: *closes eyes, rolls head back* Me: *innocent grin* Man: Bleeeechy. Me: Sorry. There was too much at stake. Beatles: "We all live in a yellow submarine..." Me: Dear. Your hippie drug music is getting stuck in my head. If you don't change the song, I shall have to kill you in your sleep. Man: Good. Me: Good that it's getting stuck in my head, or good that I'm going to kill you in your sleep? Man: Both. Me: That's disturbing. Beatles: "A yellow submarine.... a yellow submarine...." Me: Look, I love the Beatles. And I understand that this music was very important for people of your generation, but... Man: Yup. Me: But now it's an earworm. Man: Yup. Me: You're not going to reply to that at all? Man: No, because you're making fun of me for being
Post a Comment
Read more

In which I link to myself...

February 05, 2016
... but there are a number of thoughts in this week's review of The Affair  over on CultureGeek that I think might be interested in those of you reading this blog. It seems like the show is trying to say things about the roles we play in our lives, about striving to be more than we are and our inevitable failures to live up to our own expectations or the expectations of others. This is where  The Affair  stops being a soap opera: while it is certainly melodramatic, it does not ascribe to a candy-coated happily-ever-after view of love or marriage or even sex. Even the layers have layers, and there is no one who does not end up trapped at some point or another.  The Affair  seems to say that more than money, status, education or circumstances of birth, it is those we love who trap us the most - and yet money, status, education and circumstances of birth play the vital parts in each person's life as it unfolds. There is no action without consequence. Go check it out, and let
Post a Comment
Read more

February 02, 2016
One of the fun (?) things about doing the taxes: Finding out you made a smart choice. And I'm going to share this one in detail, because if my Facebook feed is any indication, some of you are considering the same choice. Here's how it worked out for us. In February of last year, Jim and I decided to cancel our cable. Now, that was a big thing for people who watch as much (too much!) television as we do. We're selective-ish about what we watch, but even with our standards, we follow a good many shows. I pick what I watch for CultureGeek, and we also have a necessity to keep up with science fiction and horror television for our respective writing careers. We were paying Charter for internet, landline and a full cable package. That was running us about $1740 a year, or $145 a month. For the record, when we dumped them, they were about to jack that up to $175 a month, or $2100 a year. We opted to keep the landline for emergencies and so that we have a SpamPhone - you know
2 comments
Read more
More posts